About Us - Learn to Grapple

Welcome to Learn To Grapple! 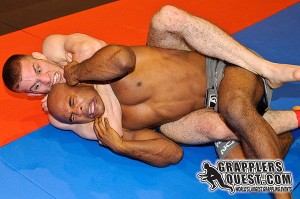 My name is Brian McLaughlin, I’ve been grappling since 1999.  Back then grappling was nothing short of an obsession for me.  When I wasn’t on the mat I was thinking about grappling, I wanted to learn as much as possible as quickly as I could.  Unfortunately, there was no youtube, websites like BJJ.org and intheguard.com were a havens for me just because they had a few pictures of random moves.

Originally, I was just going to make a site for my students, so I could have a comprehensive curriculumn for them to refer back to, but as I began I realized with a little bit of effort I could do much more.  Although the internet and video technology has evolved there really isn’t a web site with a free cohesive ‘encyclopedia’ of grappling.  I’m hoping this site eventually become our sport’s wikipedia.  A spot where the first day white belt and the seasoned veteran competitor can both learn a few tricks.

So who the heck am I and why should you bother learning from me?  I started grappling in 1999 and bounced around between many instructors before finding a home with Rob Kahn (Royce Gracie Black Belt).  After about 11 years I finally earned my Brazilian Jiu-Jitsu black belt. While doing BJJ I was fortunate to find some amazing wrestlers and Judokas to round out my game as well.  Along the way I competed everywhere I could.  From sport Jiu-Jitsu to submission grappling and professional MMA – I’m not the best in the world but I’ve been on the medal stand at the Pan Ams, ADCC North American Trials, Grapplers Quest Pro Divisions and NAGA World Championships.  As a fighter I’ve won titles for Ring of Combat and even fought on The Ultimate Fighter.  My real focus though is as a coach.  I teach at three different academies and have students ranging from timid elementary schoolers to blood thirsty cage fighters.

I definitely don’t know it all though and I’m hoping to make Learn to Grapple a place where experts from across the globe can share their knowledge with the world.  Selfishly, I’m even hoping I can pick up a few tricks.

More than just techniques, Learn to Grapple is going to include strategy, philosophies and everything else that makes up the grappling lifestyle, so check back often!

(c) 2014 Learn to Grapple - MMA Gyms Near Me - Train MMA and BJJ in Poughkeepsie and Hudson Valley, NY